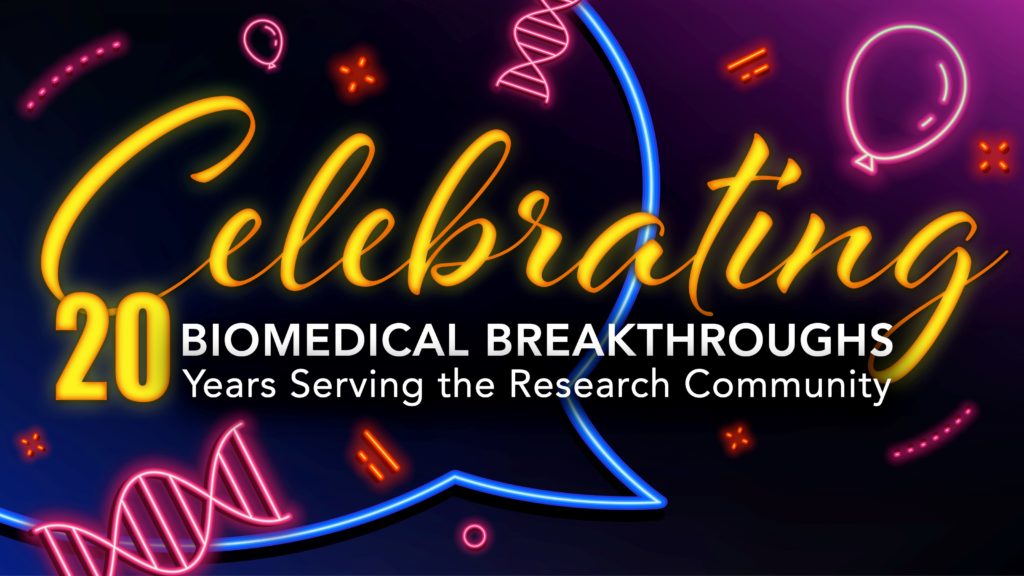 As a member of the research community, you know the last 20 years have been amazingly productive for biomedical sciences. We’ve seen breakthroughs in nearly every major discipline, and new biomedical subfields have arisen seemingly overnight. The continuing global effort around COVID-19 highlights the importance of biomedical research and discovery.

During the excitement of these last 20 years, Cell Sciences has kept up with advances in biomedical science to make sure researchers can get what they need for their experiments. With each new discovery, we’ve adapted our products and expertise accordingly, and that’s why today we’re proud to celebrate our 20th year in operation.

To celebrate our 20th anniversary, we’ve compiled a list of 20 biomedical breakthroughs that best demonstrate 20 years of remarkable research. Read on, and let us know what you think. Do you agree? Did we miss any?

1.  The Rise of Lentiviral Vectors

Throughout the 1990s, the concept of gene therapy grew in the public imagination as key genetic manipulation technologies like PCR started to mature. As a result of their DNA-editing capabilities stemming from the discovery of reverse transcriptase, lentiviruses were first studied in the context of their gene therapy potential as early as the year 2000. In the two decades since then, lentiviral vectors have found their home in a plethora of different niches where researchers seek to reprogram eukaryotic cells. Many scientists use immunoassay kits to test for the expression of lentiviral-transduced phenotypes.

Since 2001, Antibody-drug conjugates (ADCs) have been used for the guided delivery of small molecule drugs to precise locations on cells. At present, dozens of new ADCs are in development, and there are few limits to their application in oncology and other pathology areas. Many researchers developed ADC prototypes using commercially available antibodies. ADCs are far from a breakthrough of the past, however. With the advent of advanced artificial antibody constructs with multiple specificities, next-generation ADCs can localize their drug payloads using three or more different targets, minimizing off-target activity and passing on fewer side effects to patients as a result.

In a multinational effort comprised of public and private-sector researchers working in tandem to sequence the human genome for the first time, the Human Genome Project embodied a heroic vision of science as a path to improving human life. With the formal completion of the Human Genome Project in 2003, the first comprehensive functional mapping of the human genome was complete. Using the data gathered by the project, researchers could subsequently utilize genomics as a lens of inquiry, paving the way for a flurry of breakthroughs. Later, using gene sequences derived from the project, researchers produced a galaxy of recombinant proteins and peptides, enabling additional studies.

Discovered in 2003, the FOXP3 gene is critical for the function of regulatory T cells, and by extension, the adaptive immune system. In the aftermath of the discovery, researchers have learned that manipulating the expression of FOXP3 can have profound impacts on the cytokine secretion of Tregs as detected by standard immunoassays. Though public understanding of FOXP3’s importance remains minimal, subsequent research has shown that it is one of the most important puzzle pieces to understand the behavior of the adaptive immune system, thereby implying that future research into immunotherapies will benefit from FOXP3’s discovery.

The vascular endothelial growth factor, better known as VEGF, is a critical growth factor which determines the rate of angiogenesis and vasculogenesis. VEGF-targeted therapies entered the market in 2004, though work began as early as the 1980s. Today, researchers investigating VEGF can select from a wide variety of relevant reagents.

While the Wnt signalling transduction pathway had been known by other names in the 1990s, it wasn’t until 2005 that researchers elaborated on the potential significance of the pathway in the context of the human endocrine system. Today, the elements of the Wnt receptor complex are commercially available for researchers.

For many years, harvesting stem cells for research was fraught with controversy and impaired by difficult access to necessary human-derived material. With the 2006 discovery of the transcription factors responsible for prompting differentiated somatic cells into pluripotent stem cells, researchers everywhere gained access to a method which could reliably generate stem cells for use in developmental studies or regenerative medicine. Rather than using stem cells derived from cord blood as had been the norm before the discovery, the new method for generating iPSCs enabled researchers to utilize cultured cells of nearly any type, removing the supply bottleneck from their research.

As with the Human Genome Project before it, the Human Metabolome Project sought to provide a comprehensive database of the human metabolome, including small-molecule metabolites as well as metabolically relevant proteins and receptors. With the first edition of the project completed in 2007, subsequent editions have catalogued more than 50 times the number of metabolites contained in the original, accounting for more than 114,000 metabolites as of 2020. Much like the Human Genome Project, the Human Metabolome Project is a major enabler of subsequent research — and it’s also a living database with endless clinical implications to discover.

10.  The Discovery of miRNAs and piRNAs

MicroRNA was first discovered in the early 1990s, but their significance in transcription regulation and gene silencing wasn’t understood until the 2000s when advancing genomics methods enabled closer study. In 2008, researchers showed that a sub-category of miRNAs called piRNAs were actually a distinct RNA trope, indicating that there were multiple independent noncoding-RNA-mediated pathways for gene silencing.

The target of rapamycin (TOR) and mammalian target of rapamycin (mTOR) protein kinases regulate cellular proliferation, making them broadly relevant to many different areas of human health. As with many other cellular pathways, work to elucidate mTOR’s significance began in the 1960s and produced viable therapies by the 1990s, but it wasn’t fully completed until 2009 with the publishing of a definitive consensus on the pathway’s evolutionary relevance in eukaryotes. Many researchers today choose to utilize polyclonal antibody products to investigate adjacent signalling cascades relative to the mTOR pathway, like Akt.

While the TALEN system of restriction-enzyme and nuclease-based genetic editing developed in the early 2010s has largely been outshone by CRISPR-Cas9, its debut sparked a flurry of research into potential delivery mechanisms for in vivo genetic editing which would later be used by alternative editing systems.

Via tagged antibody-based technologies like flow cytometry, CyTOF, and highly sensitive immunoassays like ELISPOT, the late 2000s and 2010s ushered in a new era where researchers could extract deep data about the behavior of individual cells where before only population-level analysis was technically feasible. By enabling the study of individual cells, single-cell analysis technologies have allowed researchers to understand cellular behavior at its most granular level, providing a higher standard of accuracy as well as enabling new opportunities for data visualization and deeper understanding.

While the PD-1, PD-L1, and CTLA4 proteins were characterized as immunologically relevant as early as the late 1980s, only in 2011 were these immune checkpoints therapeutically operationalized by the invention of highly effective immunotherapeutic drugs for cancer. Each of the proteins is connected to a signalling cascade which subsequently determines whether cells pass through or halt at checkpoints which gate their growth. With the invention of checkpoint inhibitor therapy, practitioners and researchers could manipulate the proliferation of tumor cells, providing critical relief to patients with cancer. Research activity regarding these immune checkpoints remains high, and researchers frequently require an ample supply of experiment-ready checkpoint proteins to conduct binding studies.

Using genetically engineered antigen-presenting dendritic cells, researchers generated a clinically-validated proof of concept for an immunotherapeutic vaccine against prostate cancer in 2011. While much work remains to be done before the vaccine will be ready for the market, researchers working on dendritic cell-based vaccine immunotherapies will need an ample supply of prostate tissue-based reagents for their experiments. Unlike many of the other breakthroughs which we’ve discussed so far, dendritic cell cancer vaccines are still in their infancy, meaning that derivative discoveries are likely far off.

Thanks to the research efforts of the Doudna lab, the CRISPR-Cas9 archaea-derived gene editing system made waves globally upon its debut in 2012 as a result of its immense promise for future work in cellular and molecular biology. Given the precision of the CRISPR-Cas9 system, researchers could ostensibly develop gene-silencing or gene-activation therapies to address epigenetic disorders. Some researchers have even attempted to tailor antibodies to artificial antigens in vivo. While many researchers grimace at the thought of the over-the-top hype which accompanied CRISPR’s discovery, recently conducted first-in-man clinical trials have shown that CRISPR genuinely did inject immense promise into the future of biomedicine.

In the aftermath of lentiviral vectors becoming convenient and accessible tools for reprogramming of human cells, researchers turned to newly-matured genetic engineering technology to redesign the cells of the immune system so that they could be used therapeutically against cancer. In 2017, the FDA approved two oncology drug products containing chimeric antigen receptor T-cells (CAR-Ts). In these and the subsequent CAR-T cancer immunotherapies to reach the market, genetically engineered T-cell receptors (TCRs) were expressed on cultured immune cells, allowing them to target tumor cells in patients. Since then, CAR-Ts have been immensely successful in delivering patients with better outcomes than prior therapies. To evaluate the efficacy of these CAR-T cells preclinically, many immunologists utilized ELISA assays to detect immunological signalling molecules.

Aggressive ovarian cancer is frequently incurable, and many cases are only discovered when a patient’s tumors are in an advanced stage. When the pharmaceutical company Astra-Zeneca announced in 2018 that its poly ADP ribose polymerase (PARP) inhibitor drug Lynparza had been shown in a large clinical trial to reduce the risk of ovarian cancer progression by as much as 70%, it reshaped the disease’s therapeutic landscape entirely. PARP inhibitors are also under investigation for applications in breast cancer, leaving many hopeful for additional future breakthroughs.

In early 2019, researchers at the University of Dundee discovered that several isoforms of the PP2A-B56 protein complex were responsible for specific aspects of the localization of cellular machinery during mitosis. In particular, the group showed that each of the newly-characterized isoforms could bind preferentially to epitopes on centromeres, microtubules, and the spindle. Though the PP2A-B56 complex had already been characterized in the early 1990s, the Dundee group’s experiments clarified the mechanism, thereby setting the stage for the development of cancer therapeutics targeting more granular aspects of the mitotic process.

Cell Sciences Is Ready for The Next 20 Years of Research

While you may have reached the end of our discussion of the top 20 biomedical breakthroughs of the last 20 years, we know that there might be a few notable discoveries which didn’t make our list. If you have a personal favorite breakthrough or discovery which you didn’t see mentioned here, feel free to drop a comment below.

We’re always interested in learning more about what our customers are working on in their laboratories, especially when they’re in need of a product which might be hard to find. Similarly, if you anticipate a major product need which the scientists of the near-future will need to conduct research, we’d love to hear about it so that we can continue to keep pace with our customers over the next 20 years. Reach out to Cell Sciences, and we’ll be your partner in research for decades to come.