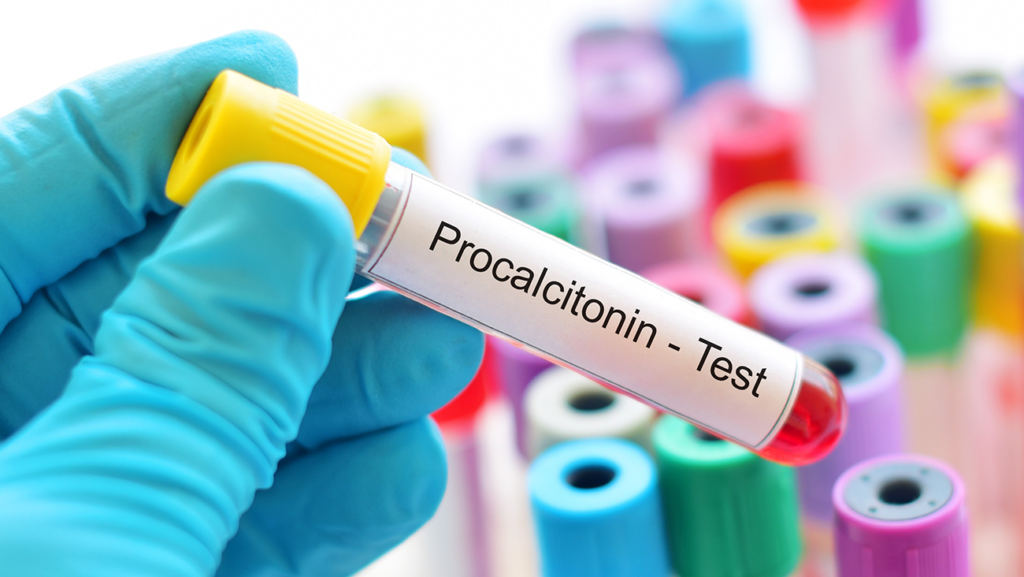 Procalcitonin (PCT) is the 116-amino acid precursor of the 32-amino acid hormone calcitonin. Encoded by the CALC-1 gene, it is expressed mainly by the parafollicular cells (C cells) of the thyroid gland, within which it is converted to calcitonin before being released. Widely recognized as a biomarker of sepsis, PCT levels within patient serum samples are often used by clinicians to detect bacterial infection and guide antibiotic therapy. This highlights the importance of PCT to promote effective antibiotic stewardship in the battle against antimicrobial resistance (AMR), and demonstrates the need for high-quality reagents to advance procalcitonin research.

Although calcitonin was first discovered in 1962, it was not until 1975 that it was found to be the product of a precursor. Within a study to investigate calcitonin biosynthesis in the chicken ultimobranchial gland – a small organ rich in calcitonin – PCT was identified by pulse-chase experiments, molecular weight determinations, biological activity measurements and analysis of tryptic peptides. PCT is now known to be derived from preprocalcitonin, a 141-amino acid protein encoded by the CALC-1 gene. Preprocalcitonin is rapidly converted to procalcitonin through endopeptidase cleavage of the N-terminal signal sequence, before becoming the mature calcitonin hormone.

PCT is the precursor to calcitonin, a hormone which plays an essential role in calcium homeostasis. Calcitonin functions to lower plasma calcium levels by mechanisms which include inhibition of bone degradation by osteoclasts, promotion of calcium resorption by osteoblasts, and inhibition of calcium resorption in the kidneys. The extracellular calcium concentration is the main factor controlling calcitonin secretion. Calcitonin exerts its effects through interaction with the calcitonin receptor (CTR), a G protein-coupled receptor with seven transmembrane domains; these effects directly oppose those of parathyroid hormone (PTH).

Within healthy individuals, circulatory procalcitonin levels are very low (<0.05 ng/mL) since the prohormone is converted to calcitonin prior to cellular release. However, during a bacterial infection, microbial toxins such as lipopolysaccharide (LPS) induce the inflammatory release of procalcitonin by virtually all cells and tissues, leading to significantly increased serum levels. Measurement of serum PCT has been used to diagnose bacterial infection and guide antibiotic therapy in patients with sepsis.

In addition to being an important sepsis biomarker, PCT is investigated by researchers studying Kawasaki Disease; infective complications of inflammatory bowel disease (IBD); the progression of cancer, and to distinguish between septic arthritis and non-infectious forms of arthritis.

Western blot analysis of recombinant human procalcitonin (CRH350). Produced in E. coli, CRH350 is His-tagged to facilitate detection. It has been validated for Western blot, ELISA, and for use as an immunogen.

Other popular products include:

To learn more about our recombinant human procalcitonin, or any of our PCT products, contact us today.